Kitabu't-Tarifat (The Book of Definitions) is an alphabetical dictionary of basic concepts in many fields. One of the most studied and taught discipline was logic when this dictionary was written. Moreover, in that period, logic was seen as an instrument that could be used in other areas for thinking right. In this respect, this work contains many basic concepts used in the field of logic.

The aim of this study is to answer the following questions related to tasavvurat in the book "Kitabu't-Tarifat" written by Sayyid Sharif Gurgani as a dictionary: did Gurgani indicate whether these issues are related to logic? In other words, does the reader who does not know the logic understand that they belong to the logic when he/she reads these subjects? On the other hand, are they the definitions made in these matters just the explanations of those who are interested in logic? From which logicians and which logic books had been Gurgani affected when he prepared these items? Does these definitions belong to Gurgani or to someone else? 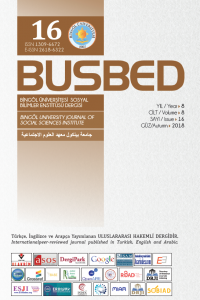