This study aims to explain the standardization existing in the contents of the mass media and the situation that this standardization transforms the individuals using the media organs into a uniform person and this situation is tried to be drawn attention. Although the effect of globalization, which has an increasing influence on world countries since 1950s, has been felt in many fields, globalization has shown itself mostly in the field of communication technologies and especially mass media. The contents of mass media, which emerged under the influence of globalization and which are the most important carriers of mass culture and popular culture in the world, have been made similar. Because with this similarity, it will be easier to keep the masses under control. As the individual exposed to similar contents every day, maybe at any moment with the proliferation of mobile devices, they become the same with everybody, that is, a uniform individual. Therefore, firstly, the factors that determine the content of mass media and the transformation of these contents in the process will be revealed. Finally, the issue of producing similar contents with the creation of a uniform perception will be discussed, and the phenomenon of uniform individuals resulting from these similar contents will be discussed. In the study in which the literature review method was used, the information existing in the literature was synthesized, and the relationship between the contents of the mass media in standard form and individuals was tried to be explained with a critical perspective. 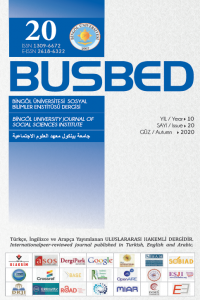