Climate is a factor that controls the environmental embodiment and human life intimately, and its influences appear throughout the years. The Bulanık-Malazgirt (Muş) Basin is located in the middle section of ‘the upper Murat-Van part’ of the Eastern Anatolia Region. Besides, the Bulanık-Malazgirt Basin has specific characteristics in terms of its physical and human geographical features, above all, especially with regard to its climatic characteristics (severe continentally), it differs from around. There has not been any geographical study that present the factors scientifically which shape the characteristics of The Bulanık-Malazgirt (Muş) Basin, which has an essential location in the Eastern Anatolia Region. Within this framework, the purpose of the study is to reveal the factors of planetary and physical geography that affects the climatic characteristics of the basin with the principals and research methods of geography. In the direction of that purpose, the meteorological data of the stations which situates at and around the investigation area are analysed with the Digital Elevation Model (DEM), the Digital Topographic Maps and the Geographical InformationSystem (GIS) and statistical programs. In consequence of the analyse studies, basically planetary factors (geographical latitude, air mass related to general circulating air, pressure conditions) have roles over the climate of the investigation area as well as some physical geographical conditions such as elevation, orography, exposure, large geomorphologic units convert the planetary factors substantially. Mean temperature of the investigation area is 7.1 ºC, and its average annual rainfall is 467.6 mm. According to various climate estimates, the investigation area has arid and less humid climatic features. Along with the whole characteristics, it is understood that the Bulanık-Malazgirt (Muş) Basin has more arid and cooler climate when compared to areas at South (stations of Tatvan, Bitlis and Ahlat), West (Varto) and Northeast (Ağrı). 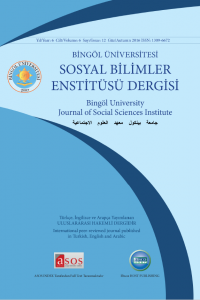