THE PROBLEM OF EQUALITY, FREEDOM AND SECURITY IN THOMAS HOBBES: AN ASSESSMENT BASED ON NATURAL LAW

This article is about Hobbes' thoughts about people's problems of equality, freedom and security in the state of nature and civilized society. The evaluations were made on the basis of Hobbes' idea of natural law. The laws of nature is the principles found by reason prohibiting things harmful to humans and aiming to protect human life. In the case of nature, everyone is equal and everyone has an equal right to everything. This causes distrust and hence war among people. Also, in the case of nature, there is no force to force people to comply with the law of nature outside of their conscience. People want to protect and truly be possessed their lives, their families and their property, which they consider valuable to them. Therefore, people transferred their rights in the state of nature to sovereign and established the state. Thus, people who abandon the evil of the state of nature, in which ignorance, barbarism and poverty are wandering, have found peace and prosperity by establishing the state, thanks to the rights and freedoms afforded to them by the law. 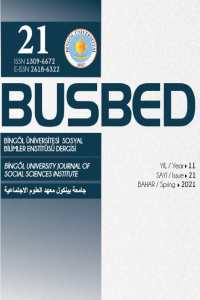